Oddly, the pioneers of pop-up bars in Johannesburg are Vitamin Water. It makes sense that they have been able to do that seeing that they are a product made by Coca Cola. I also have no idea how their brand stays viable seeing that their product does not have much of a competitive advantage over similar products. This is partly because there are no real similar products on the market. I do buy Vitamin Water when I embark on long journeys beyond the provincial borders (or when I’m hungover.) I’m guessing there are others that ritually buy it. Kinda like @jackswede57…

The pop up bar concept is pretty new to Jozi. The concept has been used by several brands to sell their products in urban spaces. But the bar concept has only been pulled off by, well Vitamin Water and Puma. Their existence has been few and far between. If I’m not mistaken, the Vitamin Water bar at 44 Stanley was around in 2009/2010! The rarity of these made me sceptical about Union Bar in Melrose Arch/ I expected to be bombarded with corporate paraphernalia as some media strategist tried his utmost to impress his corporate overlord that this risky venture was worth it (“It worked in Berlin! It must work here!!”) Union Bar has been opened since 17 October but I only ended up at it last week. That was a mistake. I feel as if my life has been missing this piece of awesome for far too long. I now loathe the fact that it’s only opened until 17 December.

Do note this is a place which I would normally completely ignore as the whole idea of it seems way too pretentious and really “not my style.” But as an apparent hipster, I need to break away from the social norms and the nouveau social norms my hipsterism has caused. So I visited it.

The décor is pretty freaking fantastic. As the bar is around for such a short time, it utilises the essence of an empty shop shell to create a brash, unkempt, industrial feel. The décor doesn’t try to hard but where it does try, it pulls it off well. The bar itself reminds me of the type you’d expect under a palmed-thatched roof on a beach in Maui even though it’s nowhere close to that. I do like the lights too. The store is supported by Grey Goose. The branding is quite prominent but it was not imposing. 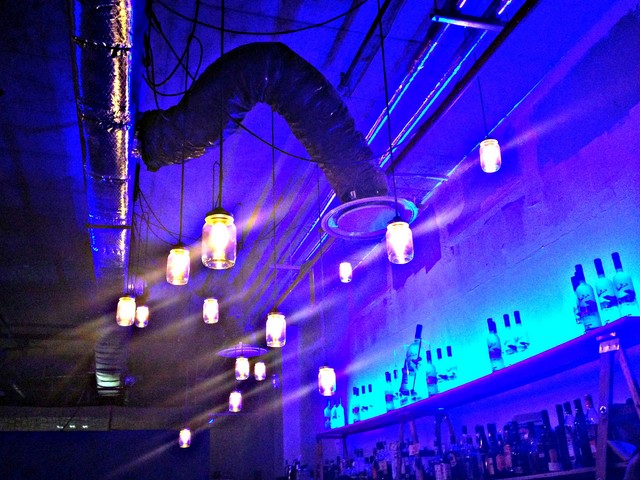 It works quite well and my friends and I were rather pleased with our time there.

However, the reason why the bar is so bloody damn awesome is because of the cocktails. Oh the cocktails. Being rather nonchalant about the Union Bar concept, I did not pay much attention to the website and their statement about molecular mixology. This is the fun sibling of the molecular gastronomy family. It’s also the sibling that you will find passed out in a gutter next to Tiger Tiger. But in a good way!

The first round of drinks consisted of the obligatory beers and a single cocktail. This cocktail was named “50 Shades of Grey Goose.” I did laugh at this name. Then I drank it. HOLY ADOPTIVE MOTHER OF CHRISTIAN GREY that was so good! It’s served rather promiscuously with a strawberry attached to the martini glass. On it sits this gentle foam that gently oozes into the glass creating a sensual grey mist. Then you drink it and you’re mind is whipped into a state of carnal bliss. The elderflower and basil infuse to create a seductive, reversed aroma through your nasal passage. This intertwines with the vodka as you beg for more, more, MORE. Yes, it was that good. It really was that good.

At this point, I still had no idea about the mixologist based theme of this bar. The next drink to come by was a “Tin Cup.” Served in a heavy tin antique styled mug, it looked like lager that was presented out of an oak keg by dwarves and hobbits. The foam, however, was this lighter-than-air foam that was like no other. The ginger beer within the mug was pretty normal but had these air pockets of surprise that made you raise your eyebrows in wonder. Oddly I still hadn’t equated the bar with being all fancy. Am I that stupid?

This is when we bumped into the owners of the bar. They’re terribly awesome chaps. When you go by, have a chat with them. They explained to me their philosophy of the bar and the whole concept behind the cocktails. These were created for the Union Bar for a limited time. Each drink is not merely a way to get drunk but an experience that will linger on far beyond the effects of the alcohol.

The last cocktail I tasted was truly an experience – an “Eastern Experience!” The barman brought out a bamboo place mat, laid it down and lit a tiny agrabathi. He placed a black bowl down and seasoned it with salt and pepper. This was quite cool. The drink itself was completely out of this world. I really could not discern exactly what I tasted but this spice came through without it actually being spicy. Even that description is not accurate. Everybody around the table had a sip and each one had a look of bliss after the cold liquid graced their oesophagus. You just got to try it. I left completely satiated. The entire experience of the Union Bar was so unexpected and so great. You need to do this. When to go: They are open every day and currently, the Union Bar is the best place in Jozi to do after work drinks. They are quiet during the week but on weekends, it’s totally packed with the trendiest that Jozi has to offer. You will need to book a table on the weekend but during the week, just pop by.

How to get there: The bar is situated in the heart of Melrose Arch opposite YDE. It’s really close to the big Christmas tree near the piazza.

Cost: So here’s the slight problem. The cocktails are not cheap at all. You will probably pay double the price of a normal cocktail. That being said, the quality is phenomenal and each cocktail was completely worth the price. You do run the risk of paying a rather huge sum for something you don’t enjoy. But hey, life is not always about playing it safe…

Anything Else: Dress trendy. Melrose Arch keeps being the place to be and be seen in Jozi. It has this longevity that’s outlasted virtually every modern suburban revival.