I was vegetarian for six years of my life. I didn’t have a reason for becoming vegetarian. The basic story is that I woke up one day and decided not to eat meat. The decision had no basis in religious belief or in my love for animals. The decision did make me seem like a “better person” to certain religious and animal loving people. But that is not important. I only got rid of this annoying habit six years later with some delectable lamb curry made in a potjiekos. I’m pretty cool with vegetarianism but I still do make fun of most vegetarians just for a laugh.

Sustainability and efficiency have been rather huge buzzwords for the better part of a decade. I am very much a supporter of the ideals it promotes. I believe in the merits renewable energy. I believe we need to critically analyse our habits and cut out the inefficiencies. I believe recycling is a key to achieving this. So is changing the mind-set surrounding materials we use every day. But I am very much in cahoots with the other side. I see the merits in continued construction of coal-fired power plants. I see why fracking or mining of mineral sands that neighbour important ecological sites is necessary. I may not agree with many of these, and am quite against some of these, but on the flipside, I don’t agree with many “go green” concepts either. I’d like to think my approach is somewhat balanced. 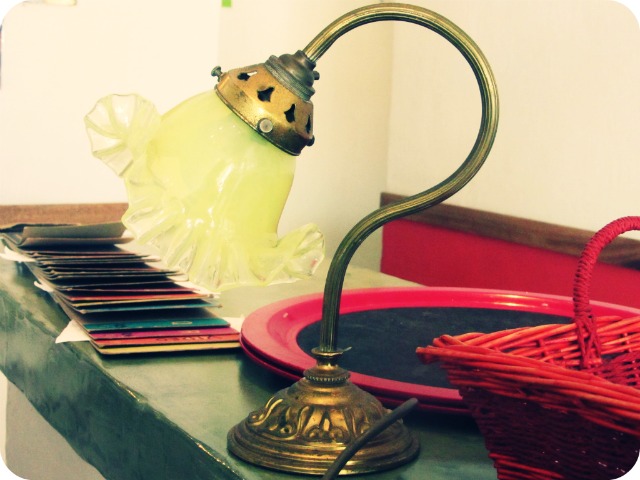 I’m also pretty sure my self-diagnosis of being balanced is incorrect.

But we’ll work with it here.

This is why I despise vegans.

Okay, the reasoning takes a rather roundabout route in getting to its point but lets work with it. I actually despise the vegan lifestyle. I feel that it is not a balanced attempt at doing good. The insistence of non-consumption of any animal derived product opens a greater can of tofu than to what appears on the surface. What are the implications of staying away from animal-products and does this staying away actually help?

Okay this is nitpicking. Vegans have this drive not to consume anything animal-derived but food in its essence is produced by killing a lot of living and breathing organisms that aren’t plants. To drive up efficiency and ensure that the population is fed and well cared for, we do need to destroy a lot of the earth. To ensure we comply to the ideals of avoiding animal-derivatives, huge tracts of land will be under-utilised, costs will go up and people will die from starvation due to the inaccessibility of food.

Yes, I will agree that the holistic view of the diet and lifestyle that goes along with being a vegan is very beneficial but that is totally possible with not being discriminatory when it comes to the source of your food and other items. It’s just slightly more difficult. Seeing that we are working with holistic views, I’d estimate that if you take the socio-economic and financial considerations into account, there really is no benefit in following this vegan lifestyle.

But hey, I could be wrong.

I think there is a need to address the inefficiency of food production everywhere and not just for a few chosen ones. Innovate in the sector such that the goals of the vegan lifestyle is incorporated into all arenas of food production and distribution. Change processes for all instead of a select few.

On a personal level, I think the vegans I’ve met following this vegan lifestyle have just annoyed me with their holier-than-thou outlook on life and constant vigilance to the life’s most important act – eating. It really is bloody annoying. But hey, this is just a stereotype so this doesn’t hold much merit.

I did put my hatred aside to frequent what I would consider and important part of Jozi’s food landscape, The Greenside Café. It’s a vegan restaurant. Yes I was crazy with this choice but I guess stepping out of a relative comfort zone is good for you. Another reason for choosing this venue was that my vegetarian friend, Kavita, was up from Cape Town so I had to do something pretty cool for her. On a visit to Cape Town, she took me to one of the coolest eateries that I have been to called the Eastern Food Bazaar so I felt the need to keep up with this! 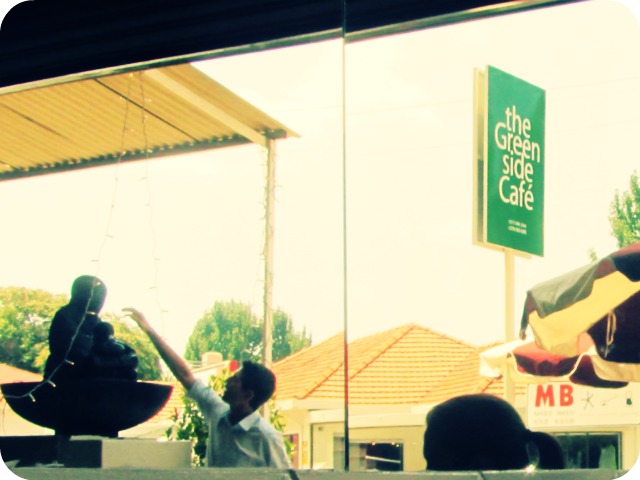 The décor is white, clean, simple and inviting. There is sense of calmness that exudes from the venue. One that puts you at ease and makes you want to come back for the perceived serenity. I liked it a lot. Damn these vegans for getting this right. 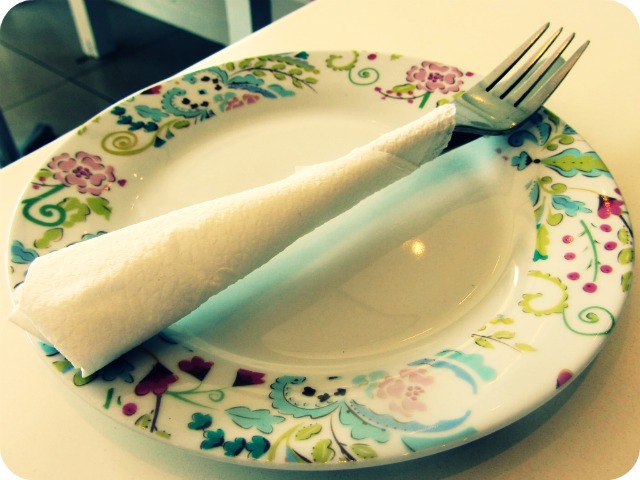 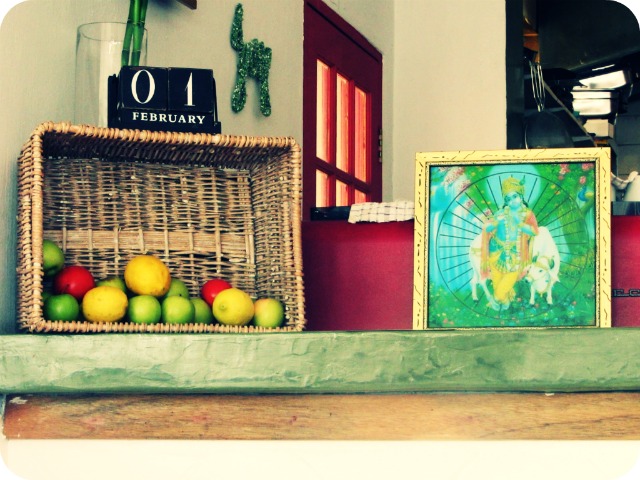 The tables are just pretty and I was quite amped to see the menu and taste what was on offer. This is not that easy a task. Kavita’s mind was blown – it is not often that a vegetarian is presented with this much choice. Normal menus have chips and a hastily put together vegetarian platter. Indian and Italian places offer a bit more as the curries, pizzas and pastas generally tend to have a few vegetarian options. However, a double sided menu offering unlimited choice is unheard of! We took a good 15 minutes before deciding what to eat. 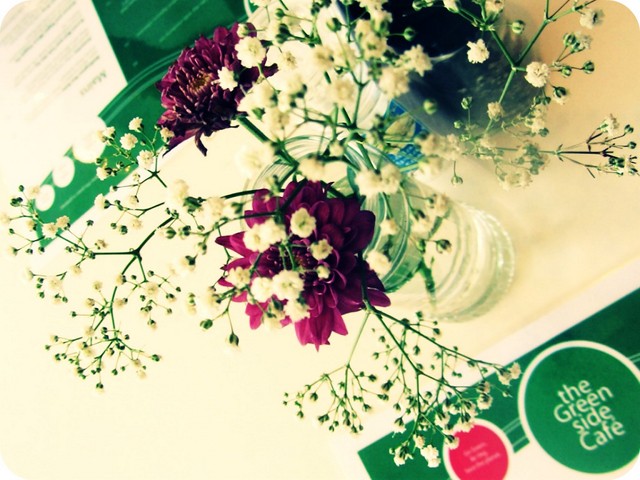 The food was seriously good.

Yes. It was damn good. This time, my mind was blown. If I am honest, this might have to do with the balsamic vinegar I liberally dashed on top of the dish but I guess this added to the wonderful melee of flavour that caressed my innards. The food was rich yet earthy and worked with such great balance and harmony. The cooked portions danced on your palate whilst the zest from the fresh ingredients produced some sort of mystical happiness. The owner explained this as being a direct result of the abundant prana available in the food as everything is prepared from scratch upon order. On a more scientific level, it probably has something to do with none of the flavours escaping through refrigeration and preservative spicing. Whatever you may believe, you cannot fault the food for being perfectly prepared. 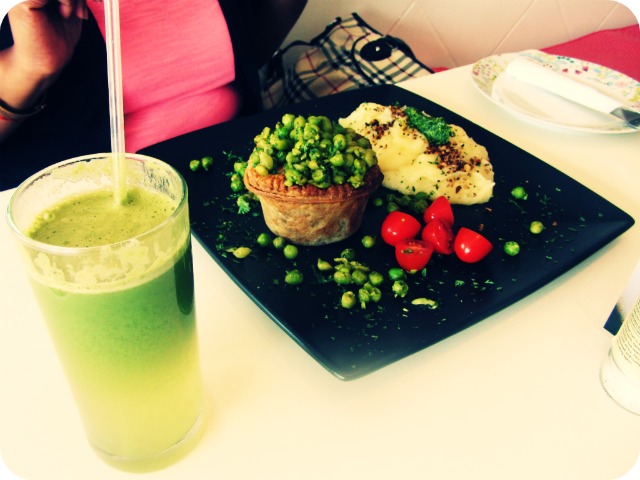 I definitely would eat there again.

But this is based on the fact that the food was so good and not its vegan origin. It practically is impossible to prepare food this tasty for all three (or five) meals of the day. You can’t constantly have fresh produce available for preparation purposes. To achieve this, you would need to religiously attend to a rather large garden or shop at a market (or supermarket) on a daily basis. None of these options is really carbon friendly. You would also have to prepare you food at breakfast, lunch, supper and the two snacks you may fit in-between that. Modern life doesn’t afford us this luxury. We have to trade off this for convenience. This definitely has an effect on flavour and enjoyment of the food. Animal-derived products shine on the convenience side. Grilling a frozen, battery-farmed, genetically-enhanced chicken off-cut on the George Foreman griller takes less than 10 minutes and tastes superb. Grilled brinjal doesn’t really have the same appeal. Also, the food here at Greenside Café is not cheap at all and eating here every day would bankrupt most people so that is ruled out.

The Greenside Café is truly a culinary gem. I highly recommend the establishment for the mouth-watering selection of food that is on offer. It is a huge plus that there is countless health benefits associated with the food and the food preparation techniques they use. But it didn’t get me bought on changing to a vegan lifestyle. If, however, this lifestyle can solve problems like this on about mining of mineral sands, then I shall fully embrace it.

But hey, if you want to go there for some superb food, give me a call and I will gladly come along! 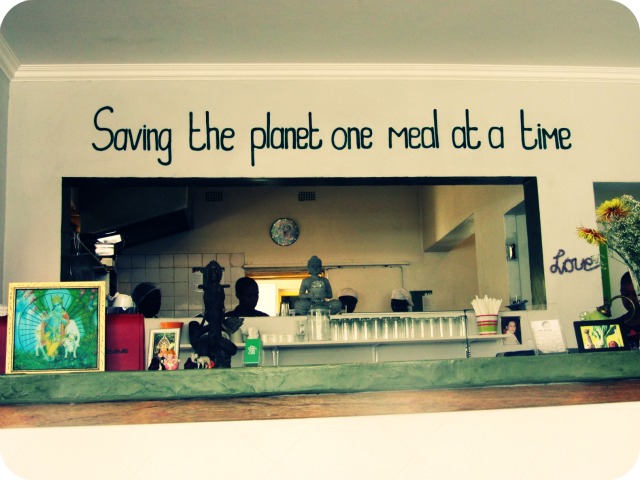 When to go: Go when you are hungry. Even if you’re craving meat, go here anyway. The café is open from Tuesday to Sunday 10h00 – 17h00 and is also open late on Friday evening and Saturday evening. The kitchen’s last order is at 21h30.

Cost: The food here is not cheap. Main meals are priced from about R70 and a juice costs from about R30. The juices are freshly squeezed on order. Be adventurous and try whatever the waitron suggests. The taste may not appeal at first but it oddly grows on you. I have heard the pizzas (even though they lack real cheese) are seriously good. Cards are accepted.

Anything Else: Vegans don’t bite so you’re relatively safe. I’ve also deliberately not told you what I ordered. Take that as me encouraging experimentation. 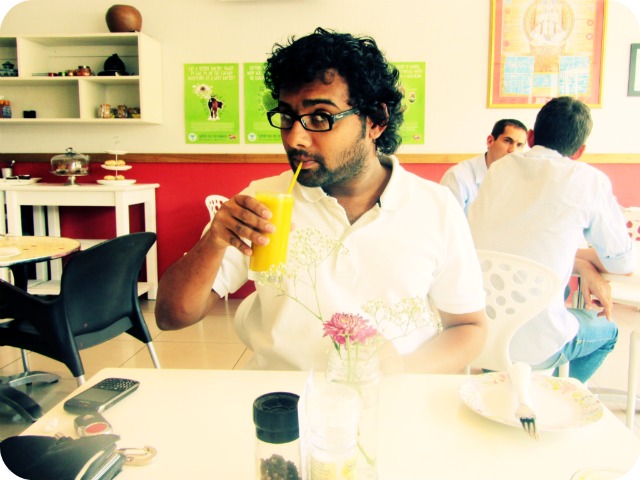 4 thoughts on “Greenside Café: Attack of the Vegans”