To get to Ellis Park, you need to walk through Hillbrow. Ok not really, but that is what we did. You still shouldn’t be walking through Hillbrow. The reason is not because it is intrinsically unsafe but it follows the simple pattern. When you enter a setting where you don’t really belong in, you become a soft target. If you were walking through Chatsworth and I saw you with some huge DLSR loosely hanging on your neck with your wallet in your back pocket, I would rob you! That’s my take on it all although it goes a bit deeper. Anyway, we’re not focused on that today – a few weekends ago, I took a trip down to Ellis Park to watch a soccer match. This time it was the match between English side Tottenham Hotspurs and our own 2010/2011 PSL champions Orlando Pirates.

Ellis Park is quite a weirdly placed stadium. Originally built as the home of Transvaal rugby in the 1950’s, the present stadium is an approximately 60000 seat stadium built in 1981. At the time, the nearby suburb of Hillbrow was the Sandton of today. Nowadays, it’s the Hillbrow of today. Hillbrow has become synonymous with being everything a modern city should not be. The name conjures up drug dealing illegal aliens that fling fridges out of windows onto cars driving through the streets. Okay, this actually does happen. But it does remain very beautiful. As it was match day, the traffic to the stadium was impossible. We were dropped off in Hillbrow and we walked to Ellis Park. This allowed us to admire the, and yes I am borrowing this phrase from Zoolander*, “derelict chic” of the splendid buildings that have seen better days. At the centre of it is the infamous Ponte Tower. Built to house the affluent and trendy, nowadays it does the opposite. The degeneration of Ponte is a symbol of the fall from grace of Hillbrow. I recently visited the Real Madrid home ground Estadio Santiago Bernabeu and was marvelled by that “feeling” you had when you stepped onto the ground. I get the same feeling when visiting Ellis Park. Whereas Soccer City is absolutely majestic, Ellis Park has that “feeling” that Soccer City still needs to get. South Africa did win the 1995 Rugby World Cup at Ellis Park after all. 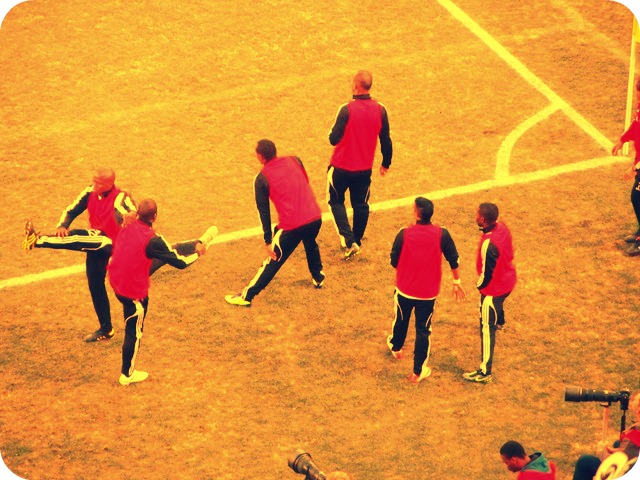 The power and energy of a packed stadium is something indescribable. Although Pirates did lose that day (I don’t really support them but they were a local team) I still had a great time. Do yourself a favour and go watch a game – any game – at Ellis Park. I guarantee that you will love the experience.

When to go: On a match day! You can catch both Football and Rugby games at the stadium. The Lions rugby team use this as their home ground with bother Super Rugby and Currie Cup games being played here. These games start in February and run till around November. The stadium is the “home” ground for Orlando Pirates but it’s best to check the PSL schedule to see when games are being played. The PSL season runs from about September till April.

Cost: The matches played here are generally cost under R100. The refreshments at the stadium can fluctuate so if you are going to have a boerie roll and a beer at the stadium, best you take a decent sum of cash.

Anything Else: It’s a stadium so don’t wear heels, skinny jeans or a three-piece suit. Sports regalia* reigns supreme.