I have to admit, the title is a tribute. I did not come up with it although it is a fair way to describe the Carlton Centre. While walking the streets of Melville, I found this newly opened charity shop which looks like it has been there for the past 12 years. It’s a maze of old; I mean vintage clothing, forks, toys, posters of the solar system and books. While navigating the paraphernalia of yesteryear, I stumbled upon a golden library hugging the rear wall filled with gems of exemplary knowledge that have been committed to paper yet have this vast knowledge that will probably not reach the audience it should. I actually thought about this lost knowledge whilst viewing a special exhibit on alchemy at the Science Museum in London. It was beautiful with scrolls and leather-bound volumes of indecipherable texts that consumed the lives of so many key academics. These texts, though, are virtually illegible due to the allegoric symbols and prose that were illegible to the peers of the authors and are now impossible to truly understand today. The complexity, the colour, the language itself, the art that is created with the language and even the content is just, just wow. An academic could dedicate his life to their study and once he is gone, the knowledge is lost once again. Browsing through the aisles of books that reside in the many second hand book stores across Jozi, I always get this sense that all this knowledge could be (and already has been) forgotten.

One of the gems in this vast library of forgotten texts that plastered the wall of this Melville domain was a book from 1988 by Elisabeth Johnson called, “Just Johannesburg: 101 ways to enjoy yourself in the city of gold,” which I have obviously never heard off but is still available on Amazon! The book cost me five bucks but originally was a birthday gift to Dave in 1992. He probably realised it really is of no use in modern Jozi and donated it to this charity shop. The book itself is one of forgotten knowledge as it gleefully exclaims the beauties of a city that would soon undergo a transformation that it would never have thought possible. The book has many seriously cool things to do which I am assuming are now lost. During the 1980s, they had these tour busses that took you through the Jozi CBD – this is long gone but shall soon be resurrected with the City Siteseeing bus which is scheduled to be launched early in 2013. There is also this piece on what is apparently the biggest liquor store in Africa. I’ve not been to the area so I’m not sure if it is still there.

Anyway, that’s enough beating around the bush – the title is stolen from this book. 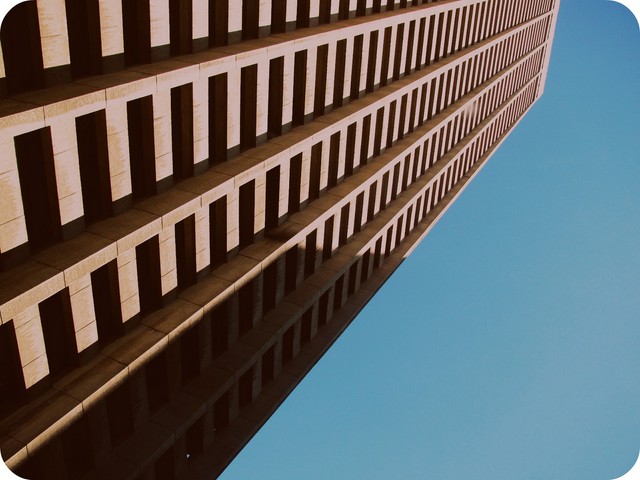 This building is pretty damn tall. If Usain Bolt were to run up the building, he’d probably take thirty minutes because of all the stairs and he would be damn tired. I think Mo Farrah would be a better bet to get up faster. Anyway, if it was laid on the floor, Usain would take around 20 seconds to cover the 223m (some say 220m but I don’t have a measuring tape) to cover the distance. That’s pretty damn tall. What makes it more amazing is that if you look at the Jozi skyline, you’d never say it’s the tallest skyscraper in Africa. This has been the case since 1971 when it was built. It will only be surpassed by the Alger Medina in Algiers which will stand at 430m tall when completed in, I estimate 2016.

I actually had a chance to go to the top of the tallest structure in Africa which is one of the smoke stacks at Duvha Power Station in Witbank. It stands at 300m which, according to my opinion, is because the bloody station is in a bit of a valley! Unfortunately, there were some issues with the weather and other boring stuff and I could not venture to the top of the stack. I should follow up on this. Anyway, the smoke stack in Secunda is apparently 301m tall but if you bend your head a bit, the Duvha stack is indeed taller.

The Carlton Centre was a city block of pure opulence. The centre itself was the Sandton City of the 70s and 80s. All your boutiques (from that era) were housed here. I am guessing the equivalent of the Sandton Kugels would, on a Saturday morning, come down from their luxury apartments in Hillbrow and max out their credit cards here. Next door to the Carlton Centre was the Carlton Hotel which has seen many a famous soul in its past. In true style, the mall, hotel and few adjacent buildings were all connected via skywalks and other fancy labyrinths of cool. The centre also housed the Skyrink which was an indoor ice rink about 19 floors up or so. As with most of the inner city, the centre has lost its prestige. Both the hotel and ice rink are now closed. That being said, it is NOW quite a lively mall consisting of most of the major chain stores (and even some chain boutiques) that are doing extremely brisk trade. You could call it inner city self-rejuvenation. The McDonalds and KFC are huge and if you are peckish, that is where you could go. It’s pretty safe but it is inner city Jozi so use your common sense and make sure you take some precautions. If you do want to learn more about this history, I suggest you get hold of Nechama Brodie’s AMAZING “The Joburg Book” which is a book my blog would love to be when it grows up. 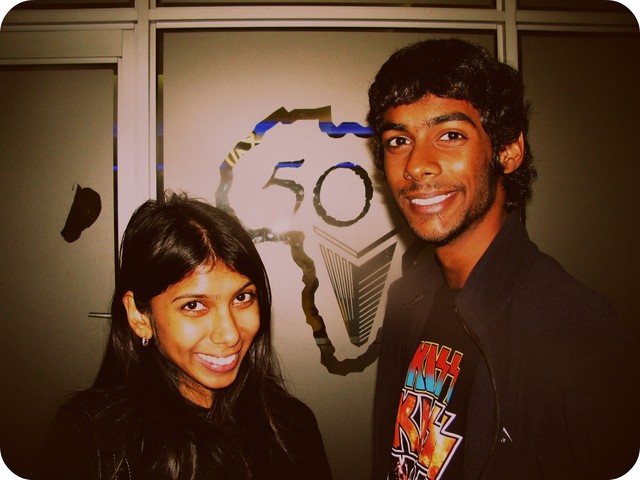 Once you’re done with your shopping, there is an express lift that takes you up to the “Top of Africa.” This is why you are visiting the Carlton Centre. Located on the 50th floor is a viewing deck which allows you to see forever… 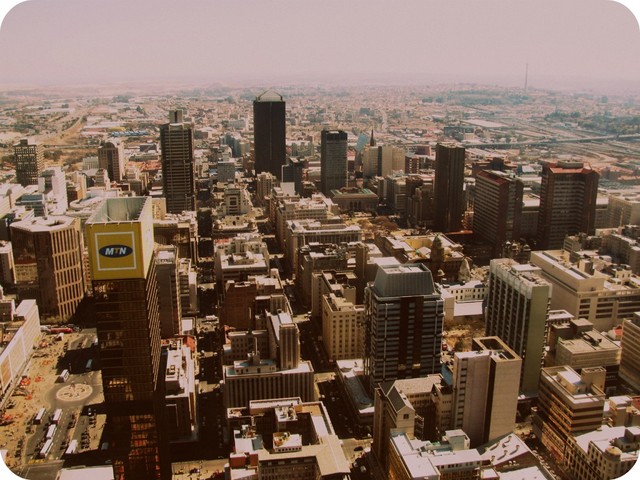 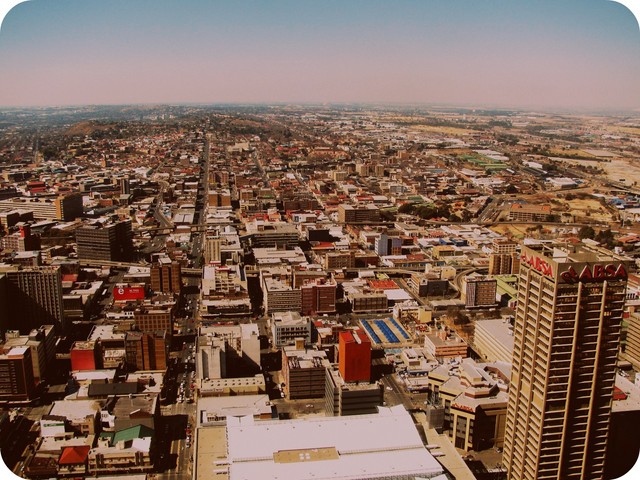 The view is humbling. When I was in Bangkok, I stayed in Baiyoke Sky and regularly went up to the revolving skydeck on the 83rd floor. That view changed my life as all I saw was city, city and more city in every direction. This view is slightly different. Jozi is not a gargantuan metropolis even though it’s home to around ten million people. Each cardinal direction offers you a different persona (which is documented on plaques) which relays to you the story of Jozi. To the south are the mine dumps which literally built the city. Beyond it is Soccer City and Soweto which tells an even greater story. To the west is the city of Johannesburg with its domineering banks that run this continent. To the east is the urban sprawl of residential Jozi as it reaches to the coal fields that power the behemoth. To the north is a view of contrast. You encounter the grandeur of the forgotten Hillbrow which slowly melts into the new powerhouse of the Sandton city skyline. On a clear day, you can see the pyramids of Giza. I’ve been up there several times and I still feel so much each time I go up. The cities untold stories rise to the surface and tell you the deepest secrets without using sight or sound. 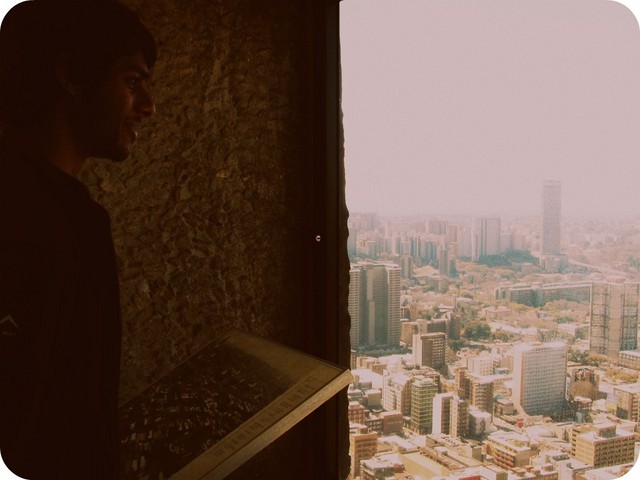 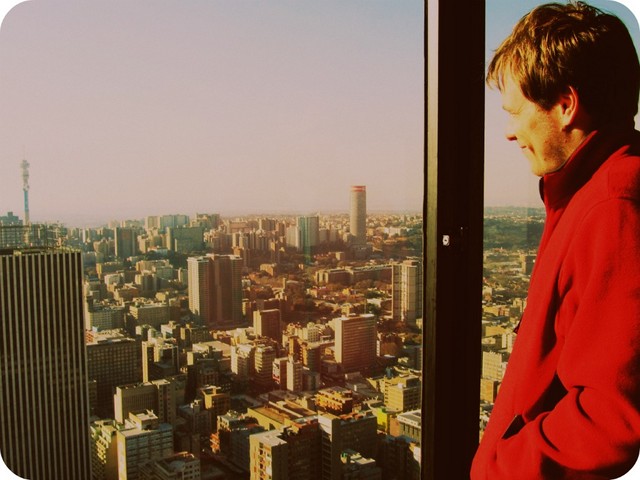 In true South African style, you can get much better pictures than I have. I will leave it at that…

The pictures I have used here are both new and old. I did this purposefully to illustrate the changing face of the city. The most visible changes to what you will see today are the branding on the buildings. Some buildings have been renovated and have a very different façade than what existed a few years ago. One of the most telling omissions from the landscape is the loss of the mine dump that housed the Top-Star drive in. Even the Top of Africa has vastly changed from the heydays in the 80s. There used to be a Wimpy (which became the country’s first multi-racial restaurant in 1975) and several curio shops with many branded items. Additionally, there was a little cinema that used to show a short film entitled “A Day in the life of Johannesburg.” This is all gone. Jozi is a breathing beast and oh so much exists and then is suddenly lost. The great alchemists greatest achievement was the deep understanding they personally gained from this mystical art. That’s what Jozi just asks you to do… 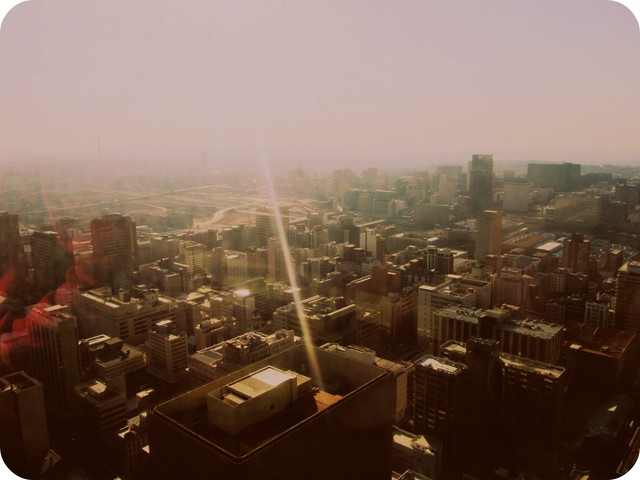 When to go: In it’s heyday, the Top of Africa was opened from 09h00 to 23h00 every day. Nowadays, it is opened from 9h00 to 18h00 during the week and until 17h00 on weekends. I’ve read elsewhere online that it closes at 14h00 on a Sunday although I am questioning the validity of this. I’ve gone on weekends where I go by to Market on Main around midday then go to the Carlton in the early afternoon. But I guess its best to adhere to this. Another option is to go on a proper guided tour with Picnics in the Sky which is quite a cool idea if you really don’t want to venture to the Carlton by yourself.

How to get there: The Carlton is in town at 150 Commissioner Street. You can’t miss it even if you tried. That being said, if you are unsure about this area, PLEASE consult a map before you drive the route as this is the CBD and your satellite navigation system regularly fails in tightly packed areas such as this. The main parking entrances are off Main, Marshall and Kruis Streets. I usually come from Arts on Main so I drive down Commissioner Street (keeping on your left as the road is used by the Rea Vaya BRT) until the building is on my left. Then I turn into Kruis Street and after about 50m, take the left slipway into the parking lot. There are other routes. The parking lot is seriously cool and scary at the same time as you seem to dive into the depths of an endless crypt. It is quite safe though although I suggest parking close to the lifts. Take a token Indian, Coloured or White person along and the guards will already know you are going to the Top of Africa. They will then direct you. Once parked, go up the two floors and once you get out, find a security guard although they will probably find you first. They will direct you to the box office.

Cost: It costs R15 to go up to the Top of Africa which is quite a bargain if you ask me. Also, take your parking ticket to the box office and they will stamp it for you and voila, you don’t even have to pay for parking. If you can get a better deal than that, then you are superman.

Anything Else: If you are scared of traffic, try to go during off-peak periods or during the weekend. During winter, the sun sets around closing time and you can witness one of the greatest sunsets from here. Another idea is to do a little tour of the CBD as you make your way from the Gautrain station at Park Station through town using the Rea Vaya busses. One of the busses stops outside the Carlton Centre. Try it and you just might like it. 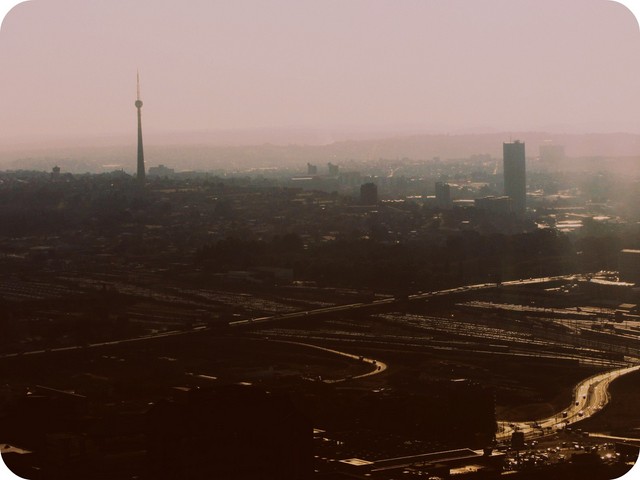 5 thoughts on “Carlton Centre: On a clear day you can see Forever”